In October 1999, The Litchi Orchard was born after the 10-acre property in Foxhill was bought by the Eb family. It consisted of a wholesale plant nursery and office,

Many of the North Coast Community are familiar with or have been a part of the journey over the last 20 years under the stewardship of Paul Eb and his family. But the history of the property goes back even further. The existing original surveyor’s document from September 1925 sectioned the property as Sub 44 (of 11) of Lot 71 No. 1524 when the district was still referred to as Victoria.

George Hulett, Bruce Hulett’s father, bought both the 10-acre plot and the neighbouring 5-acre plot (now Sage and Salt Rock Nursery). According to neighbour Trevor Thompson of Seaforth Farm, the litchi trees were planted around 1930 by George Hulett. The plants were grown by Trevor’s grandfather Arthur Starr in Verulam, who bought Seaforth from Horace Hulett.

In the late 1930s, George Hulett sold the then ‘Salt Rock Litchi’ to Bruce McDonald, who sold to Ronnie Sermon, and later Errol Legassick. Over the years, each custodian has carefully tended the litchi crop each season and the beautiful canopy of year-round green trees have become a recognisable feature of the Foxhill, Salt Rock landscape.

On purchasing the property from Errol Legassick, Paul and Bronwyn Eb renamed the property ‘The Litchi Orchard’. Bronwyn took charge of the wholesale nursery, renamed The Orchard Nursery, and Paul maintained the trees and ran the crop.

Each December and all through their high-school years, the three Eb children would be roped into litchi sales from the rustic litchi shack on the side of the road. Paul built an open-sided timber shack on stilts where the family took lunch breaks (and the occasional snooze on an outdoor couch). Twenty years on, this is now the well-loved restaurant, The Shed.

Paul Eb’s heart for the property was always for it to become a place where his children could find work and for him to have a place from which to offload his fresh produce from his farm in the Glendale hills. The current Family Farm Shop, with its quirky Honesty Tin payment system, is where this vision will take root.

Under the management of eldest son Jeremy, The Litchi Orchard was transformed into a destination venue which has been the launchpad for a number of local small businesses and entrepreneurs over the years. The catalyst for the property was on holding the first Farmer’s Market in October 2009.

A simple extended venue area was built alongside the original pack shed with a concrete slab, timber poles with open sides and a corrugated roof – taking inspiration from Paul’s litchi shed style and design, which has resonated through the years.

The family managed to find authentic food vendors, including the German bakers, olives, cheeses, chickens, cakes, local wines, coffee roasters – as well as of course Cindy’s Fresh Produce, the longest-running stallholder to date. Quality local craft traders joined the market, such as Sue Tuffin’s Pottery, and the current market shed was built to house them. Local musicians found a new stage from which to launch (from seasoned stalwarts such as Dave Charles & the Handmade Blues Band and Robbie & Zoe Sturgeon, to James Freedom and of course Majozi).

The addition of Night Markets in 2010 helped solidify this platform for local musical talent and welcomed a much-needed community gathering for families once a month. Also in 2010, the original pack shed was converted into the first café and kitchen space – the Orchard Café.

The demand for artisan fare on the North Coast was evident, whether spurred on by the markets, trends from the Cape, or the large number of local entrepreneurs in need of an affordable outlet. On creation of Artisan Avenue in 2015 which converted the market area into four 50m2 retail shop spaces, popular market traders were the obvious choice for applications.

Many well-loved local businesses (including two churches) have either called The Litchi Orchard home at some point or used the property as a platform from which to grow. Over the years, it has provided the opportunity for many small businesses to test their products on the public and has been a springboard from which to grow their businesses and then move on. It has been the privilege of the Eb family to witness this over the years with each new season.

The Litchi Orchard has always celebrated good food, family and locals – and after a period of running as a wedding venue, many couples have also cemented their love in this green heart of the North Coast.

In 2018, the Farmers Market was rebranded into the Makers Market to align with the makers movement gaining momentum worldwide. The North Coast is a haven of talented individuals and crafters who rely on the support of their community. The Night Markets underwent a rebrand in 2018 into seasonal events. A number of well-loved annual events have been added to the calendar over the years, such as Pinotage on Tap and the popular Bubbly Fest.

Over the last 20 years, the family has allowed the property to progress authentically and maintained the heart and feel as far as possible within the constraints of finance and zoning. But their collective vision has always been to create a space for them to live and work whilst being a legacy for their greater family. 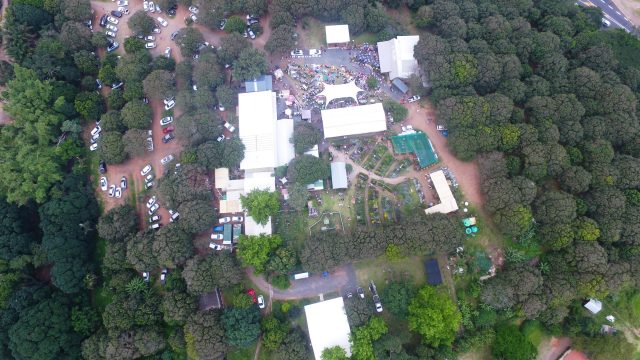 It is in this light that progress is being made to rezone the property together with direction and vision from Union 3 Property Developers, Bloc Architects, and AF Planning. The current commercial, entrepreneurial heart of the property will be enhanced and reworked within the frame of the overall development which aims to have three small residential nodes within the litchi trees. The entire development is being designed around the 90-year-old litchi trees which are essentially the heritage of the property.

Under family stewardship, The Litchi Orchard has become, and will continue to be, an authentic green haven for the North Coast community of families and businesses and further enhance the Foxhill precinct.

2019 I Love Ballito
This photo is copyright protected